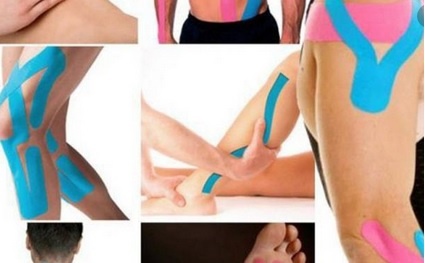 I think all the people noticed some colored stripes on the body of the professional athletes. From what I noticed, they are used today by people at work, at the gym, etc.

This bandage can be found under other names, these are: neuromuscular bandage, Kinesiotape, kinesio taping, neuromuscular taping, colored strips, etc. Today, it has gone from being considered a complementary technique for manual therapists, kinesiologists, physiotherapists … it is becoming popular at the point of power found on the shelves of large areas as self-consumption.

The bandage is a bandage made of a hypoallergenic fabric such as cotton. Cotton in combination with an elastomer will allow a longitudinal elasticity between 130 and 180%. This elasticity differs depending on the manufacturer and quality, not at all elastic, completely breathable, not obstructive with blood and lymphatics. circulation, supports water, adheres to the skin with the help of a medical glue that leaves no residue and is placed with adequate tension through body heat. It makes a second skin effective between 3 and 6 days, depending on the area and exposure, the glue is arranged in a wavy, imprint type, thus facilitating the desired effect of this type of bandage when it turns on the skin. which we will see later.

This neuromuscular bandage, although considered to be called self-health, is not without controversy. Doubts about the effectiveness of these bandages exist, because to date there are no scientific studies to prove their effectiveness. They are used in the following cases: muscle pain, prevention and treatment of sports or professional injuries, complementary to any manual or manipulative therapy, doctors, physiotherapists, osteopaths, masseurs, physical trainers from different disciplines, etc.

In addition to the above benefits, they also have the following benefits: